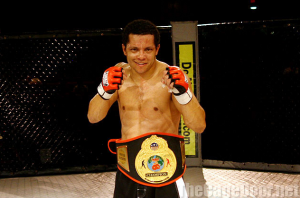 Another intense fight–the most in fact! This past weekend I had the opportunity to take a shot at the United States Amateur Combat Association Light Weight title over in Houston.  Mick Maynard and his crew regularly put on great events and this one didn’t fail to please.  Going in, as was also the case in my last two fights, I was scheduled to go up against the hometown boy.  There was quiet a buzz about his stand up skills.  Ola’s game was definitely brought, as was anticipated.  We had a war!  So much so that we earned “Fight of the Night” honors.  I was more relaxed in this fight than any of my others and threw some crazy karate kicks but also did more than one foolish thing (like ducking my head several times).  When we entered the fourth round we were both calling on our reserves of energy.  After getting a mean takedown and working my neck out of a guillotine attempt I was able to secure mount and take the armbar for the win.  I can’t wait to start training again for my next fight.  This one really brought home the realization of the blaring holes in my game.  But, it was oh so much fun!  I love a war!  Thank you so much to my wife, my sister Rachel, Patsy and Julie who made more noise than all of the Houston crowd combined.  Along with Matt and Bob, they seemed to be the only ones in Houston Theater Arena who wanted me to win!  Ha ha!  It’s all good though!  Thanks to Mick Maynard his wife and crew for putting on an exceptional event and thanks to all of you who support Texas MMA!  As always, thanks to the places were I am forged!  Guerrilla Fitness, Rubicon Fight Sports and Fit and Fearless.

This entry was posted in Title Fight. Bookmark the permalink.